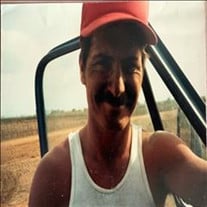 Wesley Lee Deckard Aka "Pete" Pete was born on August 11, 1959 In Checotah, Oklahoma, the 3rd of 4 children to Wesley and MaeDean Deckard. The nickname Pete came from his dad, who told him when he was a toddler he resembled a cartoon character named, "Sneakin Pete" so he started calling him that. Pete went to school in Checotah and as a teenager, ran around with his friends, mainly being Mike Johnson, Rodney Millican, and Matt Phillips. His friends recall him as being fun, easy going but could get rowdy type of guy. He would say he enjoyed "fighting with them Porum boys." Pete joined his father in the workforce at an early age and quickly became a master as an operator of all types of heavy equipment. He knew every detail to get the groundwork done and for the erecting of professional building and the same for getting perfect grade for many highways. Many were in awe of his skills and at times he would be surrounded by crowds of co-workers and passersby watching him do what he did best with such ease. Never one to boast or brag, he found it a little embarrassing that someone would praise his work, but he didn't mind working long hour to do the best job, a job he and his boss, Greg, could be proud of. Pete was very protective of his girls. Even though they thought he was just being mean he always had their best interest at heart. He didn't allow cursing around them. He was always proud of them. He enjoyed their school plays and choir singings and attended if at all possible. He believed in early to bed and early to rise. He was always punctual and usually arrive 30 minutes or earlier whether it be work, family get-togethers, school functions, etc. He called Casi his wild child, Kelli was daddy's little fatto, and Jamie Lee was his little blondie. He called Jason, "coyote" and said he was always looking kind of sneaky about something. He enjoyed fishing, letting his girls do the driving on dirt roads out in the country and was a good husband and dad. Pete was known to all as an honest and truthful person, someone who rooted for the underdog and a mentor to many young men willing to do a good job and make an honest living. Pete's entire family never questioned his love for them, it was always apparent. He was an honest, truthful and loyal friend. He was very much loved by his family and will be greatly missed by them all. Pete was preceded in death by his parents, Wesley and MaeDean Deckard, brother, Lonnie Dean Deckard, and granddaughter, Quinn Dowdy. He is survived by his daughters, Casi Dowdy and husband Jason of Checotah, Kelli Deckard of Muskogee and Jamie Deckard, grandchildren, Jurni, Haedyn, Paisley, Logan, Halle, Wesley IV, Shayne and Chayse, sisters Betty Null and Ellen Adcock and uncle to several nieces and nephews. Memorial Service will be 11:00am Saturday September 18, 2021 at the New Life United Pentecostal Church, 805 W. Gentry Avenue, Checotah, Olahoma.

Wesley Lee Deckard Aka "Pete" Pete was born on August 11, 1959 In Checotah, Oklahoma, the 3rd of 4 children to Wesley and MaeDean Deckard. The nickname Pete came from his dad, who told him when he was a toddler he resembled a cartoon character... View Obituary & Service Information

The family of Wesley Lee Deckard created this Life Tributes page to make it easy to share your memories.

Send flowers to the Deckard family.