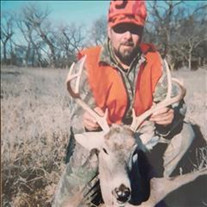 Timothy "Tim" James Smith, of Chelsea, Oklahoma passed this life on Monday, January 10, 2022 in Tulsa, Oklahoma. He was 59 years young. He was born into this world on Sunday, March 4, 1962 in Pryor, Oklahoma to his parents James W. Smith and Mildred E. (Earp) Smith. Tim grew up in Tulsa, OK, joined the Marines in 1979 and was discharged in 1981. He lived his adult life in Claremore and Chelsea, Oklahoma and retired from his business; Claremore Small Engine Repair in Claremore, Oklahoma. Tim was a loving Husband, Son, Brother, Father, Uncle, Grandpa and friend to many. Tim loved his Country and the outdoors, along with hunting, camping, shooting guns, auctions, and gun shows. Tim was very handy and he loved to tinker with motors of any kind. Most of his nieces and nephews have hunted with him at some point in their lives and even the great nieces & nephews. He loved to ride horses, four wheelers and motorcycles. Family and friends have many memories at Tim's house, like shooting their guns, which can be very noisy, riding four-wheelers and horses. Timothy is preceded in death by his Grandparents Jay B. and Sarah Jane Earp; his parents Mildred Smith and James W. Smith; his Brother Ken McCreary; and Sister Belinda Simpson. He is survived by his Wife Nancy Smith; daughter Natasha Smith; son Joshua Smith and his wife Heather and son Liam; son William of the home; Grandchildren Gabriel Smith of Chelsea, Oklahoma and Daniel Smith. His sisters, Janet Miller and Pattie Storey and their families which include five nephews, seven nieces, several great nieces & nephews and many cousins. He will be missed but will continue to be in each of our hearts until we see him again A memorial service will be held in Timothy's honor on Sunday, January 16, 2022 at 1 o'clock at the American Legion in Chelsea, Oklahoma.

Timothy "Tim" James Smith, of Chelsea, Oklahoma passed this life on Monday, January 10, 2022 in Tulsa, Oklahoma. He was 59 years young. He was born into this world on Sunday, March 4, 1962 in Pryor, Oklahoma to his parents James W. Smith and... View Obituary & Service Information

The family of Timothy James Smith created this Life Tributes page to make it easy to share your memories.

Send flowers to the Smith family.