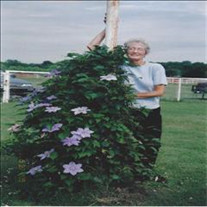 Shelia Earlene Brown passed away Thursday, March 18, 2021 at Saint Francis hospital from complications of heart surgery. She was 79 "young" years old. She was born August 22, 1941 to William Earl Foster and Lucy (Lovett) Foster. She was the second of three girls and very beloved of both her sisters. She grew up in rural Muskogee County where her favorite activities included being with her parents, aunts, uncles & cousins on the farm & trying to keep up with older sister Shirley who was the "risk-taker" and being Roy Rogers with her younger sister Thelma Carolyn was Dale Evans. She attended Wainwright and Boynton schools. In December 1956, she married Donald Wayne Jones of Boynton. Their family grew to include two daughters, Kathy and Pam. In 1961, they moved to the Rolling Hills area south of Catoosa where she remained until the time of her death. She took in ironing when her girls were little and was later employed at Seismograph Corporation and Tulsa Screw Products. She retired in 1982. In November 1976, she married Robert Lee Brown. She was a long time member of the Catoosa Church of Christ. She enjoyed reading, walking, yardwork, recreational ironing, being with friends and family, especially her grandchildren and attended many ball games and band concerts on their behalf. She enjoyed attending and helping with all the holiday and birthday celebrations. For several years, she joined family and extended family at the beach on the Gulf Coast although she did not get in the water. During her later years she overcame her fears of the water and did enjoy occasional boat rides with the family. She will always be remembered as a loving and interested mother, grandmother, sister, cousin, aunt and friend. She was preceded in death by her parents, Earl and Lucy Foster, husband Robert Lee Brown, former husband Donald Wayne Jones, sisters Shirley Bacon & Thelma Carolyn Foster & double cousin, Barbara Foster Cobb. She is survived by daughters Kathy Wilson and husband Steve of Tulsa, Pam Metcalf of the home, grandchildren Russell Wilson and wife Ashley of East Greenbush, NY and Lucy Wilson of Tulsa, great-grandchildren Emily and Wyatt Wilson and Sloan Wilkerson, special double cousin Nell Phillips & husband Riley of Irving, TX, special double cousin-in-law Bob Cobb of Atlanta Georgia, nephews Steven Bacon of Muskogee, David Bacon and wife Rita of Sand Springs and niece Carol Mcqueen and husband Kelly of Muskogee, several great-nieces, nephews & cousins, special friend Nita Arnold, sister-in-law Ruth Will & husband Duane, brother-in-law Phil Brown & wife Carol, former sister-in-law Janice Jones Beck, former brothers-in-law Ronnie Jones & Darrell Jones & their families. Memorial Service is scheduled for 11am Friday April 2, 2021 at the Catoosa Church of Christ, 617 S Cherokee, Catoosa, Oklahoma.

Shelia Earlene Brown passed away Thursday, March 18, 2021 at Saint Francis hospital from complications of heart surgery. She was 79 "young" years old. She was born August 22, 1941 to William Earl Foster and Lucy (Lovett) Foster. She was the... View Obituary & Service Information

The family of Shelia Brown created this Life Tributes page to make it easy to share your memories.

Send flowers to the Brown family.