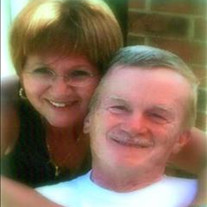 Ray M. Andrasko of Tulsa, Oklahoma, died at his Tulsa home on July 27, 2016. Ray's family will have a private gathering to celebrate Ray's life at a later date. Ray was born on July 16th, 1936 in Pittsburgh, Pennsylvania, the son of John M. Andrasko and Marie Kraykovic Andrasko. Ray came to Tulsa in 1959 to attend the University of Tulsa where he played varsity basketball. Ray married Iris on September 4th, 1995 and they made their home in Tulsa. Ray was a member of Holy Family Cathedral. Ray worked sixteen years as an art teacher with Tulsa Public Schools. He had extensive experience in construction and remodeling and even formed his own business, Crafters Custom Construction. Aside from his professional interests, Ray had many passions and hobbies. For more than twenty years he enjoyed playing softball with many of his closest friends through the Senior Softball Association. He loved the teams so much, he refused to miss a game until he was absolutely unable to attend due to health issues. He was also well known in hobby circles for the elaborate Christmas train set up he created over the years in their family home- an entire countryside and town taking up half a room and dwarfing his assistant, a huge Great Dane named Dutchess. Ray was a talented artist. His drawing and painting talents were evident in both his business and creative hobbies. Being from Pittsburgh, Ray was also a devoted Steelers fan, which became immediately obvious to those who entered his house or even just drove past it. Ray is survived by his beloved wife Iris, his son Mike and wife Christine Andrasko of Collinsville, his daughter Debbie and husband Kirk Brassfield of Houston, Texas, his daughter Nancy Andrasko of Tulsa, stepson Randy Pifer of Tulsa, stepdaughter Tonya Jobe of Broken Arrow, his grandchildren, great grandchildren, and his devoted companion, Dutchess. Ray was preceded in death by his brother, Bernie Andrasko and sister Margie Galbraith. Highly sociable and very good with people, Ray had a great many friends for which he always felt blessed. Despite his many passions and interests, Ray most cared about people. Children and animals were naturally drawn to his gentle and playful personality. Ray was always quick to help a friend or join them for a fun time. This was repaid in his final days. Ray and Iris are grateful for the love and support of friends during Ray's extended illness. Donations may be made in Ray's memory to the Animal Rescue Foundation of Tulsa, www.arftulsa.org (918) 622-5962. Ray Andrasko was a dedicated, loyal, and loving spirit. Iris notes that Ray was the love of her life and will always be. "Ray has left his earthly home to be with the Lord, and I will see him again one day. Ray told everyone don't say �goodbye' because it's too final. Instead he always said �See ya!!' "

Ray M. Andrasko of Tulsa, Oklahoma, died at his Tulsa home on July 27, 2016. Ray's family will have a private gathering to celebrate Ray's life at a later date. Ray was born on July 16th, 1936 in Pittsburgh, Pennsylvania, the son of John M.... View Obituary & Service Information

The family of Raymond Michael Andrasko created this Life Tributes page to make it easy to share your memories.

Ray M. Andrasko of Tulsa, Oklahoma, died at his Tulsa home on...

Send flowers to the Andrasko family.