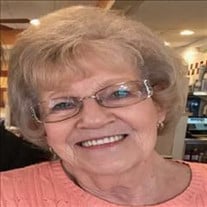 Ovil Christine Caton Gates Rasile March 8, 1935 - July 17, 2021 Chris Rasile was born in Clay County, West Virginia on March 8, 1935, the daughter of Ralph Williams and Ivy Fitzwater Williams. She was one of 12 brothers and sisters, four of whom are still with us today. She was raised in the hills of West Virginia and left home to live as a city girl in Charleston, West Virginia, with her sisters Ruth and Marie when she was in her late teens. She met our father, Charles R. Caton, affectionately known as Charlie, in Charleston, and they were married in 1953. Charlie joined the United States Air Force, and Chris began her life as a military wife. Their son Chuck was born in Charleston. Charlie's subsequent assignments took them to Massachusetts (where Sherry was born), Virginia (where Tony was born), Florida, Washington and Oklahoma before Charlie retired in 1975. Mom refused to leave the house for any reason until her hair, makeup and outfit were perfect! She loved to shop, visit with her friends, read, and watch her favorite reality TV shows. Even better were the times she spent with her children and grandchildren. Her pet ferret Katie, and then her dogs Lily and Tater, were constant companions and served as her "babies" when her grands and great-grands weren't nearby. She also loved being her granddaughter Robin's personal hair and makeup artist when Robin came to visit and graciously allowed Robin to "make her up" afterward. Chris was preceded in death by her parents, Ralph and Ivy Williams; her husbands, Charlie Caton, John Gates and Tom Rasile; her son, Tony Mark Caton; and her siblings Ruth Greathouse, Marie Greathouse, Agnes Ferrebee, Red Williams, Jean Payne, Sandy Nichols and Mary Lou Jarrell. Chris is survived by her son, Charles R. Caton, Jr., and wife Linda; her daughter, Sherry L. Larew, and husband Robert; her grandchildren Nicholas Caton, David Caton and Daniel Caton (Tony's sons) and Elizabeth Robin Seley (Sherry's daughter); her great-grandchildren Amelia, Elizabeth, Emi, Mei, Clark and Rowan; her brother Bobby Williams, and sisters Avis Legg, Dottie Hanshaw and Catherine Knotts; and a large contingent of nieces and nephews. No funeral service is scheduled. Chris is being cremated, and she will then go "on tour" as her ashes are scattered in various locations in West Virginia, Dad's and Tony's gravesites at Arlington National Cemetery in Arlington, Virginia, and along the Florida coastline, as any Florida beach was her favorite place to be.

Ovil Christine Caton Gates Rasile March 8, 1935 - July 17, 2021 Chris Rasile was born in Clay County, West Virginia on March 8, 1935, the daughter of Ralph Williams and Ivy Fitzwater Williams. She was one of 12 brothers and sisters, four of... View Obituary & Service Information

The family of Ovil Christine Rasile created this Life Tributes page to make it easy to share your memories.

Send flowers to the Rasile family.