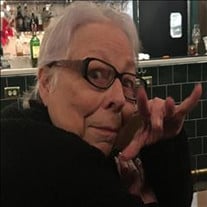 Nancy Sorrels (nee Gaddy) was born November 20, 1947 in Tulsa and raised in Broken Arrow. Consistent with the sign of Scorpio, she had a flair for the dramatic and a witty, sometimes enigmatic, personality. At a young age, she developed her signature love of reading and realized that fiction allows you to experience innumerable lives in the course of one lifetime. Perhaps connected to the empathy borne from so much reading, she recognized and wholly rejected the aspects of white supremacy in the surrounding culture. Later, she would raise her daughters to eschew racist ideologies and behavior, to take a feminist outlook (i.e., all genders should have the same opportunities and rights) for granted, and not to be homophobic. In 1984, Nancy (AKA "Nana") took the initiative to make a long shot run for the Oklahoma state senate as the Democratic party candidate. Although she was not elected, she garnered an impressive number of votes in the predominately conservative town of Bartlesville. Her work-life was eclectic and mostly in retail, selling a variety of things ranging from books, to lawnmowers, to fine art. One of the highlights of her life was the time she spent in Las Cruces, New Mexico, married to her second husband, Earl Sorrels. During that period, she enjoyed their honeymoon in Mazatlan, Mexico, as well as road trips across the western part of the United States. After her husband passed away, she returned to Tulsa to live closer to her daughter, Meredith, and her grandsons, Casey and Alex. She remained politically engaged until the end, extremely relieved to see the 2020 presidential election go to Joe Biden, even though she had been an avid supporter of Pete Buttigieg during the primaries. She passed away on September 3, 2021 in Tulsa. Nancy/Nana is survived by her daughters, Meredith Maxwell (Ron Lloyd) and Jaclyn Maxwell (Kevin Uhalde); grandsons Casey Lloyd (Alicia Lloyd), Alex Lloyd, and Oscar Uhalde.

Nancy Sorrels (nee Gaddy) was born November 20, 1947 in Tulsa and raised in Broken Arrow. Consistent with the sign of Scorpio, she had a flair for the dramatic and a witty, sometimes enigmatic, personality. At a young age, she developed her... View Obituary & Service Information

The family of Nancy Carol Sorrels created this Life Tributes page to make it easy to share your memories.

Send flowers to the Sorrels family.