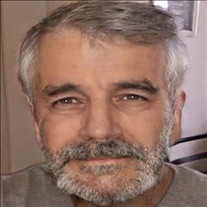 Michael Ross Pope, 68, passed away, Tuesday, November 24, 2020 in Vinita. Michael was born in Vinita, on July 11, 1952, to Shirley and Willie Susie Pope. Michael was the 4th child out of 8 children. His father Shirley was a well-known painter in Vinita. Michael was taught the value of hard work and having a good work ethic. He started working at a very early age, helping his father and brothers painting business and delivering newspapers. Throughout his life, his work ethic and hard work continued as he learned different trades. He worked in many different industries from working in a pool hall, horse tracks, traveling welder, built towers, groundskeeper at marina, cashier, fast food, and as a meat cutter. Michael was a hard worker, who provided for his family. In 1997, he experienced a health crisis when he had a heart attack which taught him that he had to slow down in life. He had experienced this type of situation before in 1968 when he broke his neck diving from the high dive at the Vinita pool. Michael overcome this obstacle in his life even though the doctors told him that he would never walk again. He would always say that he was "rough and tuff and hard to bluff". Michael enjoyed football games and most importantly his Team, OSU. He had recently gotten some independence by getting an electric wheelchair and was able to go register to vote. He loved spending time with his granddaughter Matti, driving his electric wheelchair, while she rode her bike to Shout N Sack. Michael is survived by his daughter, Trina Bowlin Skinner, of Vinita and his son, Michael D. Pope of Claremore, his grandkids Dylan Bowlin, Dayton Bowlin, Denton Bowlin of Chelsea, Mattison-Pope Skinner of Vinita, and Colt Myers of Vinita. His 2 great grand daughters Kymbria, Kellani, & his great grandson Kyree Michael Bowlin of Chelsea. His siblings Donald Pope and wife Sheri Of Eucha, Oklahoma; Jim Pope of Seattle, Washington; Glenda Pursley and her husband Ron of Bartlett, Kansas; Dennis Pope of Chetopa, Kansas; Terry Pope of Vinita; Larry Pope and wife Teresa of Emporia, Kansas. He was preceded in death by his parents and brother Rick Pope. Due to Covid-19, his daughter Trina has decided to have a private online virtual memorial for close friends and family.

Michael Ross Pope, 68, passed away, Tuesday, November 24, 2020 in Vinita. Michael was born in Vinita, on July 11, 1952, to Shirley and Willie Susie Pope. Michael was the 4th child out of 8 children. His father Shirley was a well-known painter... View Obituary & Service Information

The family of Michael Ross Pope created this Life Tributes page to make it easy to share your memories.

Send flowers to the Pope family.