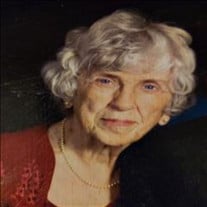 On December 7, 2020 our loving wife, mother, mother-in-law, grandmother, great grandmother, sister and aunt passed away at the age of 91. Margaret NaDean Garrett was born May 13, 1929 in Ponca City, Oklahoma to John and Virginia Wilson. She grew up in Ponca City and graduated from Ponca City High School in 1947. After graduating, she worked for Glenn Paris Furniture Store. On October 28, 1951 she married the love of her life, Bob Garrett. They lived in Ponca City for a short period then moved to Vinita, Oklahoma. In 1959, they moved to Sand Springs, Oklahoma where their four sons were raised. Upon moving to Sand Springs, they became members of St. Patrick Catholic Church where they were very active not only in church functions but in school activities before the school closed. She was involved in the annual cleaning of the convent before the Sisters who taught at the school moved in at the beginning of the school year. She was instrumental in organizing the annual Saint Patrick's Day Turkey Dinner and worked the weekly "hamburger day" on Thursdays at the school. When Bob entered the Diaconate program, she became involved in the St. Priscilla's Society, a group for wivesof Deacons. She was a member of the Altar Society, Women's Club and served on many committees and spearheaded the annual Stewardship enrollment, worked as Church Secretary for several years and maintained and distributed the Parish Newsletter. She was very active in Cub Scouts having served as a Den Mother for a number of years and was awarded the Silver Beaver Award by the Indian Nations Council of Scouting. While the boys were growing up, she was like a second mother to most of the kids in the neighborhood as well as her son's friends. She worked for Crane Carrier as a clerk/secretary in the Parts department. She was also employed by J. Harley Galusha, DO for many years starting out doing transcription before taking the training to become an Ophthalmic Assistant and becoming the head Ophthalmic Assistant. Upon leaving there she worked as the Executive Assistant to the Director of the Tulsa Boys Home. She touched many lives, probably more than she realized. If someone needed something all they had to do was ask and if able to she took care of it. She did this out of the goodness of her heart and not for praise or recognition. She was preceded death by her parents, John and Virginia Wilson, father-in-law and mother-in-law: Carl and Cecilia Garrett. Her son Rick preceded her in death in 2015 and son Robby preceded her in 2018. She is survived by her loving husband of 69 years, Bob of the home; sons Randy of Tulsa and Eric of Sand Springs; daughter in law Janet Leonard Garrett of Sand Springs; grandchildren: Robert Garrett of Thailand, Michael Garrett (Jessica) of Tulsa, Ryan Garrett (Stepfanie) of Tulsa, James Garrett of Sand Springs, Amanda Gill of Sand Springs , Kelsey Dawn Cartledge of Tulsa and Megan Hartman of Cleveland ; 8 great grandchildren; sister and brother in law Shirley and Ross Beattie of Whidbey Island, Washington; nieces Cheryl Butler of Whidbey Island, Washington, Carolyn Garrett Lowe of Chanute, Kansas, Debbie Garrett Lindley of Yukon, Oklahoma and Beverley Garrett of Athens, Alabama; extended family Cathy Leonard (George) Otey and family, Chris (Debbie) Leonard and family, Mark (Julie) Leonard and family, and Laura Leonard (Tony) Crawford, and a host of friends. Visitation will be 1pm to 7pm Saturday December 19, 2020 at Serenity Funeral Home. Rosary will be 10am Thursday December 11, 2020 and Funeral Mass 11:30am Thursday January 21, 2020 both at St Patrick Catholic Church, Sand Springs, Oklahoma. Mass will be live streamed on the Saint Patrick Facebook page (St Patrick OurLady in order to view the page you will need to add as friend). In lieu of flowers, the family requests donations in her memory to Saint Patrick Catholic Church, 204 E. 4th Street, Sand Springs, OK 74063

On December 7, 2020 our loving wife, mother, mother-in-law, grandmother, great grandmother, sister and aunt passed away at the age of 91. Margaret NaDean Garrett was born May 13, 1929 in Ponca City, Oklahoma to John and Virginia Wilson. She... View Obituary & Service Information

The family of Margaret NaDean Garrett created this Life Tributes page to make it easy to share your memories.

Send flowers to the Garrett family.