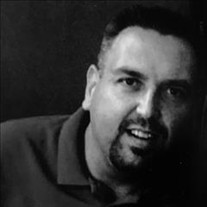 Lance Raley Cowles passed away at St. John Medical Center on April 15, 2022, where he was surrounded by family. Lance was born on July 14, 1971 in Tulsa, OK to John Hudson Cowles and Edith Waresback Cowles. Lance is survived by his wife, Rachael Crow Cowles of the home (Owasso, OK). Daughter's Raley Cowles of Owasso, OK and Allison Ashley (husband Nate Ashley) of Tulsa, OK. Brothers, Jerry (wife Ann) Cowles, Jimmy Cowles, Martin Waresback and Scott (wife Dinah) Cowles. Sisters, Mary Watkins, Sandra Cowles and sister in law Jane Cowles. He is also survived by many loving cousins, nieces and nephews. He is preceded in death by his parents, John and Edith Cowles, brothers Kenneth and Johnnie Cowles and brother in law Burl Watkins. Lance was raised in Tulsa, OK and graduated from Webster High School in 1989. He worked for MATTSCO Supply Company for over 15 years. He later went back to school and earned a degree in CNC machinery and went to work for Baker Hughes where he took early retirement due to health issues. Lance was an avid sports fan. In school he played basketball, baseball, soccer and tennis. He loved to watch any sporting event but most especially is OU Sooners. He never missed watching a football game, in fact he made his plans around when there were playing on TV. He was such an OU fan he even watch their gymnastic competitions. On weekends, Lance enjoyed attending local sporting events including hockey and baseball games. He enjoyed going to local races to watch his nephew drive and loved watching his nieces and nephews play softball and baseball. Basically, if it involved any kind of sport he was there. Lance enjoyed fishing and trying new restaurants, where he became a cheeseburger connoisseur. He also loved family cookouts depending on who would be there and what was being cooked (anyone that knows him, knows this). Lance's most "prized possession" was his daughter Raley. He loved her more than life itself and treasured their time spent together. During Raley's toddler years Lance raised her on his own and that is when their close bond was created that could never be broken. Lance has left behind one of his best friends and beloved wife Rachael, who in the last few years became known as "Nurse Ratchet" by him. They were each other's biggest fans and supporters through everything life threw their way. Lance also earned a bonus daughter, Allison. He loved her as he loved his own. Although she often thought he was mean or to tough he was only teaching her to be a good person, responsible and reach the full potential he saw in her. Lance battled with kidney failure causing him to be on dialysis and struggle with other health issues over 10 years. Two years ago, he suffered a life changing event of a leg amputation. Through every challenge he faced, he never gave up and preserved. He had two goals in life: to see his daughter Raley turn 18 and to make it to age 50-he accomplished both of those in his lifetime here on earth. Lance was hard headed and stubborn as a mule-it was his way or no way but he truly had a heart of gold and was a big teddy bear. He was honest, sometimes a little to honest, and would shoot it to you straight rather you liked it or not. Lance was very loved and will be very missed. A memorial service will be held: Saturday, April 30, 2022 at 11:30 am Oakridge Baptist Church 6103 S. 44th West Ave. Tulsa, Oklahoma 74132 1-918-446-3156 In lieu of flowers, donations in honor of Lance can be made to: American Kidney Foundation 11921 Rockville Pike, Ste 300 Rockville, MD 20852 or www.kidneyfund.org

Lance Raley Cowles passed away at St. John Medical Center on April 15, 2022, where he was surrounded by family. Lance was born on July 14, 1971 in Tulsa, OK to John Hudson Cowles and Edith Waresback Cowles. Lance is survived by his wife, Rachael... View Obituary & Service Information

The family of Lance Raley Cowles created this Life Tributes page to make it easy to share your memories.

Send flowers to the Cowles family.