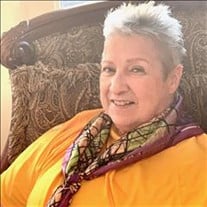 Kathleen Marie Eckenrode (Kathy), 70, died unexpectedly April 20, 2021 at her residence in Vinita. Kathy had been recuperating from a long hospitalization earlier this year. She was born on August 12, 1950 in Philadelphia, Pennsylvania, the firstborn daughter of James Charles Gillespie and Margaret Anna Heil Gillespie. Kathy graduated from Woodrow Wilson High School in Levittown, Pa, Class of 1968. Following graduation, Kathy married and moved to North Carolina as a military wife. They later relocated to Tulsa, Oklahoma and had a son, Mark Eckenrode. Kathy returned to school and pursued her education as a Registered Nurse. She later completed a Bachelor of Science in Nursing as well as a Masters Degree in Health Care Administration. Kathy held numerous positions in the healthcare field throughout her career. She was known to develop close friendships with those she worked with, and was often called a favorite supervisor. Kathy was gifted with artistic talents. Her creativity was present in everything from macrame, jewelry making, painting, drawing, gardening and decorating. She played the French horn for a time when she was young and always had an appreciation for music. She liked to make bread to give as gifts to many people. Kathy was a very generous person. She did not need to be the center of attention and was always more concerned for others well-being. She was a consummate caregiver. In addition to her parents, she was predeceased by sisters, Joan Bischoff, and Patricia Gillespie. Surviving is her son, Mark Eckenrode of Surprise, Arizona; sisters, Peggy Farley of Kintnersville, Pennsylvania, Bernadette Vaszily of Costa Mesa, California, Mary Brixey of Joplin, Missouri, Priscilla Matson of Tulsa, Oklahoma, Christine Bolanos of Long Beach, California; brothers, James Gillespie of Cushing, Oklahoma and Charles Gillespie of Santa Monica, California, as well as numerous nieces and nephews. A service of remembrance will be held on Saturday, May 1st with a mass at St. Pius X Catholic Church in Tulsa at 10:00 a.m.

Kathleen Marie Eckenrode (Kathy), 70, died unexpectedly April 20, 2021 at her residence in Vinita. Kathy had been recuperating from a long hospitalization earlier this year. She was born on August 12, 1950 in Philadelphia, Pennsylvania, the... View Obituary & Service Information

The family of Kathleen Marie Eckenrode created this Life Tributes page to make it easy to share your memories.

Send flowers to the Eckenrode family.