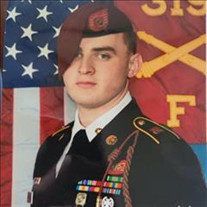 Justin William Clanton, age 24, passed this life on March 17, 2022 in North Carolina. He entered this world on May 29, 1997 in Tulsa, Oklahoma to his parents Kevin Clanton and Patty (Daniels) Lewis. Justin was known for having a heart of gold. He loved to help others, and making people smile. He had a genuine heart and a great sense of humor. In his presence was always happiness. Justin enjoyed fishing and camping, and riding in his free time. Justin was an avid OU Sooners fan. He enjoyed spending quality time with family. Justin attended Pawhuska High School and after receiving his diploma he received his welding degree. Justin always dreamed about being a part of the United States Military, this was a dream of his that he held close to his heart. On January 4, 2016, Justin made his dream a reality and joined the United States Army where he has spent the last 6 years. He worked as a mechanic in the army and was a paratrooper. Paratrooping was his passion. The last rank that he achieved was Sergeant. SGT Clanton was a part of the unit, Company D, 307th Support Battalion, 1BCT, Ft Bragg, NC. Justin was one of the most loving individuals. He was a loving son, brother, grandson, nephew, and friend. "Ride on Soldier" Justin is preceded in death on his maternal side by his great grandparents CJ and Mary Hamilton, Phillip and Mildred Daniels; great uncles Danny Daniels, Bob Sanders, and Max Sanders; great aunt Patsy Usher; step grandparents Mildred Renfrow, and John Lewis; step sisters Sherri Tolbert and Amy Robertson. He is preceded in death on his fraternal side by his great grandparents Estl and Doris Ridgley, and Carl and Zena Clanton; grandparents Bill and Jean Clanton; step grandparents Marcia Swinford; and aunt Ginger Clanton. Justin is survived on his maternal side by his mother Patty and step dad John; siblings Mathew, Patricia, Laython, Adelynn, Kim and her husband Anton, and James; grandparents Jimmy and Sharon; Aunts Christina and Tina. He is survived on his fraternal side by his father Kevin and step mom Kathryn; siblings Dakota and Hunter; step grandparent Steve Swinford; aunts Anita and Tina; Along with many other aunts, uncles, cousins, and friends who will cherish his memory forever. A visitation for Justin will be on Thursday, April 7th from 1PM till 7PM and also on Friday, April 8th from 1PM till 7PM at Serenity Funerals and Crematory Chapel located at 4170 E. Admiral Pl., Tulsa, OK. The funeral service to honor Justin's legacy will be on Saturday, April 9, 2022 at the New Life Christian Center located at 5328 Charles Page Blvd., Tulsa, OK. Burial will follow the service at Meadowbrook Cemetery located at 5665 S 65th W Ave., Tulsa, OK. Services are under the direction of Serenity Funerals and Crematory.

Justin William Clanton, age 24, passed this life on March 17, 2022 in North Carolina. He entered this world on May 29, 1997 in Tulsa, Oklahoma to his parents Kevin Clanton and Patty (Daniels) Lewis. Justin was known for having a heart of gold.... View Obituary & Service Information

The family of Justin William Clanton created this Life Tributes page to make it easy to share your memories.

Send flowers to the Clanton family.