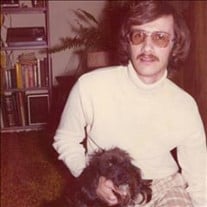 John Nash Horky November 27, 1949 � May 3, 2022 John Nash Horky, age 72, entered into the infinite unknown on Tuesday, May 3, 2022. Born in Dayton, Ohio on November 27, 1949, John settled in Augusta, Georgia where he raised his family with his wife Peggy Horky (Margaret Celeste Smith) who preceded him in death on October 19, 2001. Surviving is his son, James Nash Horky, daughter, Anna Elizabeth Horky and her fianc�, Barry Turner. John also leaves behind his six beloved grandchildren: Jasmine, Monsenjour Jr, Anthony, Kenneth, Barry Jr, and Tia. Also surviving is John's partner Ronald Pagel and sisters Jean Barney, Janice Andrews and Johanna Seeger, as well as younger brother Jim Horky. John worked for many decades with the Hajoca plumbing & industrial supply corporation before eventually retiring and settling in Tulsa, Oklahoma where his love of animals led him to dedicate his time working with the Tulsa SPCA to save, foster and rehome animals. There will be a private memorial for family and friends to be announced at a later date. Per John's wishes, there will not be a burial or a burial ceremony. In lieu of flowers or gifts, please donate to your local ASPCA or similar organization. Correspondence email is [email protected]

The family of John Nash Horky created this Life Tributes page to make it easy to share your memories.

Send flowers to the Horky family.