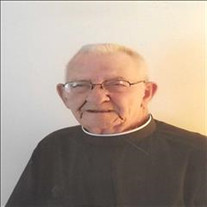 James Robert "Bob" Garrett of Sand Springs, Oklahoma passed away Thursday January 8, 2021 at Clarehouse in Tulsa, Oklahoma at the age of 93. He was born April 21, 1927 in Oklahoma City, Oklahoma to Carl and Cecilia (Boudreau) Garrett. He grew up in Purcell, Oklahoma and Cushing, Oklahoma and was a graduate of Cushing High School. He was a World War Two veteran serving in the Naval Air Force. After being discharged from the Navy he attended Oklahoma A & M College (now Oklahoma State University) studying Electrical Engineering. He married his one true love, Margaret NaDean Wilson October 28, 1951 in Ponca City, Oklahoma. They lived in Ponca City for a short period while he was employed by Oklahoma Gas and Electric. They moved to Vinita, Oklahoma where he was employed by Public Service Company of Oklahoma as a Substation Design Engineer. In 1951, they moved to Sand Springs, Oklahoma where their four sons were raised. Upon moving to Sand Springs, they became members of St. Patrick Catholic Church where they were very active not only in church functions but in school activities before the school closed. He was a member of them Men's Club, Knights of Columbus and served on the Parish Council. When anything needed to be done, he was one of the first to volunteer. In November 1981 he was ordained a Permanent Deacon for the Diocese of Tulsa. He served int that capacity at St. Patrick until his health prevented him from doing so. He "retired" several times, but when asked he gladly came out of retirement. If anyone needed to know something, the catch phrase became "ask Deacon Bob". In his 39 years as Deacon, he trained many altar servers and did the weekly Mass assignments for them. He established the Right of Christian Initiation (RCIA) program for the church. Even after the management of the program was handed off to others, he still attended the sessions and was more than happy to answer any questions that the candidates had. He also served as Deacon for Our Lady of The Lake Catholic Church in Mannford, Oklahoma. He also was active in the training program for Deaconate Candidates for the Diocese. He was active in the Scouting program, serving as Scout Master for Troop 139 until it disbanded. Many of his scouts still have fond memories of him. When the troop was disbanded, he became involved with Troop 112. He also served as Pack Master of Pack 14 and was recognized by the Indian Nation of Scouts for his service. He always had a grin on his face that all that knew him will remember. He touched many lives, probably more than he realized. If someone needed something all they had to do was ask and if able to he took care of it. He did this out of the goodness of his heart and not for praise or recognition. He was preceded death by his loving wife of 69 years NaDean on December 7, 2020, his parents Carl and Cecilia Garrett and brother Carl Garrett, Jr. His son Rick preceded him in death in 2015 and son Robby preceded him in 2018. He is survived by sons Randy of Tulsa and Eric of Sand Springs; daughter in law Janet Leonard Garrett of Sand Springs; grandchildren: Robert Garrett of Thailand, Michael Garrett (Jessica) of Tulsa, Ryan Garrett (Stepfanie) of Tulsa, James Garrett of Sand Springs, Amanda Gill of Sand Springs , Kelsey Cartledge of Tulsa and Magen Hartman of Cleveland; 8 great grandchildren; sister in law and her husband Shirley and Ross Beattie of Whidbey Island, Washington; nieces Carolyn Garrett Lowe of Chanute, Kansas, Debbie Garrett Lindley of Yukon, Oklahoma, Beverley Garrett of Athens, Alabama and Cheryl Butler of Whidbey Island, Washington; extended family Cathy Leonard (George) Otey and family, Chris (Debbie) Leonard and family, Mark (Julie) Leonard and family, and Laura Leonard (Tony) Crawford, and a host of friends. We would like to thank the staff of Clarehouse and St. Francis Hospice for the care they provided. Those wishing to make donations in his memory may do so to St. Patrick Catholic Church, 204 E. 4th, Sand Springs, Oklahoma 74063. Visitation will be 2pm to 6pm Saturday January 16, 2021 at Serenity Funerals and Crematory Chapel. Rosary will be 10am followed by Mass at 11:30 am Tuesday January 19, 2021 both at St. Patrick Catholic Church, 204 E. 4th St. Sand Springs, Oklahoma. The Mass will be live streamed on the church's Facebook page.

James Robert "Bob" Garrett of Sand Springs, Oklahoma passed away Thursday January 8, 2021 at Clarehouse in Tulsa, Oklahoma at the age of 93. He was born April 21, 1927 in Oklahoma City, Oklahoma to Carl and Cecilia (Boudreau) Garrett. He grew... View Obituary & Service Information

The family of James Robert Garrett created this Life Tributes page to make it easy to share your memories.

Send flowers to the Garrett family.