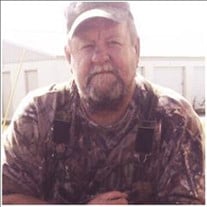 Harold Kevin "BABE" Skaggs, 66 November 29, 1953 - August 27, 2020. Babe was born in Houston, Tx to Mary and AJ Skaggs. He was the youngest of 8 children, so his mom always called him Babe. He moved with his family in 1957 and grew up in Lincoln, AR where he met and married Shelley Stewart. They had two children, Sonya and Michael. Babe worked for Fort Chaffee and the city of Fort Smith for many years. He was a great dad, always bringing home cool vehicles to embarrass his kids in the school drop off line. The green van with carpet everywhere will always make us laugh but the bronco was amazing! He an amazing hunter. He loved the Deer woods as much as he loved anything. It is said he was �deer lucky'. Others claim he was a �deer magnet', but we know it was his favorite thing to do! No one knows how many deer Babe brought down - there were just too many to count. He later moved his family to Mountainburg and then a small stent in California before bringing his family to Prairie Grove. Babe moved to Oklahoma in 1989 after his divorce. He was very close to his brother Jim and enjoyed fishing with him on Grand Lake. He missed Jim very much after his passing but Grand Lake was always home to him and here his friends and family dubbed him the Fishing Master! He always enjoyed a good game of pool. Babe married and divorced Susie, lived in Guam, came back to Oklahoma and then got the best dog in the world. He loved that dog and Raider was with him until the end. Although his wish is cremation and to be scattered in his beloved deer woods and across his favorite fishing spots on Grand Lake, we hope to post regarding a memorial get together soon because there are many stories his friends and family have and we would love to hear them all. Babe is preceded In death by his parents, his brothers Stanley, Larry, Jim, and Jeff, a sister Deanna, a nephew Rodney Swindle and a niece Rachel Swindle. He is survived by his daughter Sonya Warren and grandchildren Lyla and Slate Warren of Goshen, AR, his son Michael Skaggs and grandchildren Hayden, Scout, & London Skaggs of Langley, Oklahoma. His Sister and brother-in-law Sandy and Dwight Swindle of Mountain Home, AR and his brother Richard Skaggs of Muskogee , Oklahoma. He is also survived by many nieces and nephews who loved him. Forgive easy, love with a soft heart, and always be kind. We love and miss you Dad!

The family of Harold Kevin Skaggs created this Life Tributes page to make it easy to share your memories.

Send flowers to the Skaggs family.