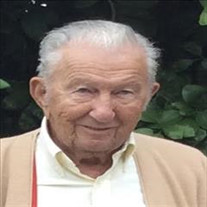 Gordon Thomas Larson, peacefully at age 92 Saturday, February 6, 2021 in Broken Arrow, Oklahoma. Gordon, the son of Thomas H and Florence L Larson, was born in Cannon Falls Minnesota on March 31, 1928, the second of eleven children in his family. At 18, Gordon enlisted in the US Army at the end of World War II. He re-enlisted and served in The Korean War, serving in the 10th Tank Infantry Division and earned many medals including the Combat Infantry Badge and the Purple Heart. His family received news via Western Union telegram from the US Army stating he was missing and presumed dead after extreme fighting on November 26, 1950. A few days later, his mother received a letter from her son who was aboard the USS Repose after sustaining a wound to the head in combat. He had hoped his letter would come before the telegram. There was more�he had been captured by the Chinese and held but had managed to escape while the Chinese were fighting United Nations forces. Gordon has always said he felt he never would have made it out of those battles in Korea had it not been for the prayers of others, especially the prayers of children. He married Viola Lorentz in Louisville Kentucky in 1953. They moved back to Minnesota soon after that and in the early 1960's, Gordy, who was never one known to let the grass grow under his feet, ironically started his most successful business venture, Larson Sod Company which served the Hastings Minnesota area primarily. Gordy and Viola divorced in 1988, but when Viola was diagnosed with terminal lung cancer in 1995 he earned added admiration from his family by caring for her until her passing in 1996. He later met a wonderful woman, Anna Broesder and the two were married in 1998. Gordon was preceded in death by his parents, his first wife Viola, his sisters: Carol Fox, Clarise Rapp and Darlene Hinz, his brothers: Lloyd, Ronald, Donald, Merlyn, Darrell, and stepson LeRoy Broesder. Gordon is survived by his loving wife Anna, daughter Debbie (Ernie)Tietz, son Thomas (Sherri) Larson, stepdaughter, LaRae (Mitchell) Wright, stepdaughter-in-law Margarita Broesder, brother Richard Larson, sister Sharon Larson, sisters-in-law Katherine Miller and Jean Larson, several grandchildren, great grandchildren, nieces and nephews and friends. Per Gordon's wishes there will be a private family graveside service for immediate family members only at a later date. Interment will be at Fort Snelling National Cemetery in Minneapolis, Minnesota. In lieu of flowers, memorials to benefit St. Jude's Cancer Charity or the Ronald McDonald House in Gordon's name are preferred. The family wishes to express their deep appreciation to all the staff at Beehive Assisted Living and the Good Shepherd Hospice for the tender loving care they provided our loved one in his last days with us. Thank you from the bottom of our hearts.

The family of Gordon Thomas Larson created this Life Tributes page to make it easy to share your memories.

Send flowers to the Larson family.