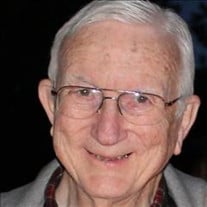 Dr. Earl James Reeves, Jr. was born March 16, 1933 in Muskogee, OK to Earl James Reeves, Sr. and Berniece Elizabeth (Jordan) Reeves and died January 11, 2021. After graduating from Wichita North High School, Earl served 4 years in the Air Force, and was stationed for a time at Point Barrow, AK. He attended Kansas State College, Friends University, and Wichita State University. He received his Doctorate of Political Science at the University of Kansas. Earl married Wilma Reece on August 30, 1959 in Wichita, Kansas. Three children were born to this union: Barbara Gail, Gregory Alan, and Carolyn Elaine. Earl became a Christian while in college and was a faithful follower of Jesus for the remainder of his life. He was an active member of a church in each community he lived in, including serving as an elder at First Presbyterian Church in Tulsa as well as Compass Evangelical Free Church in Columbia, MO. He was active in community organizations and in civil rights issues. He was involved in the formation of Tulsa's magnet schools Burroughs Little School, Carver Middle School, and Booker T. Washington High School in the 1970's. Earl taught at the University of Omaha, University of Missouri at St. Louis, and the University of Tulsa and became Dean of the Chapel at TU in 1982. In 1983, he became President of Missouri Valley College, Marshall, MO, a position he held until he retired in 1994. On April 27, 1994, his wife Wilma died after a brief illness. Earl married Bette Cochran on Nov. 5, 1994 in Columbia, MO. This union joined the families of the 3 Reeves siblings and the 5 Cochran siblings. Earl dearly loved and respected his children and step children and their families. Earl and Bette teamed up to work with Community Bible Study International and made many trips to Asia starting in 1995 where they were able to network with Christians in a variety of countries. He loved telling how thrilled his mother was when she learned that he would be working as a missionary. Earl was a great story teller and delighted in sharing his amazing variety of adventures and experiences with others and loved to highlight God's faithfulness through it all. In addition to his wife Wilma, Earl was preceded in death by his wife Bette on September 21, 2020; his brother Bob, his infant sister Jeanne Marie, and his parents. He is survived by his children Barbara (Ron) Crain, Greg (Susan) Reeves, Carolyn (Gary) McColpin and his step children Cindy (Jess) Leyva, Don (Sandy) Cochran, David (Angie Calcaterra) Cochran, Steve (Patty) Cochran and Libby (Andy) Beauchamp; 24 grandchildren and 8 great grandchildren with at least 2 on the way and by his sisters Linda Easley and Carole (Larry) Bradshaw and many nieces and nephews. A memorial service for both Earl and Bette Reeves will be held at a later date. In lieu of flowers, please consider donating in Earl's memory to one of the following organizations: Community Bible Study International, Ministry Service Center, Community Bible Study, 790 Stout Road, Colorado Springs, CO 80921-3802 (CBSI on memo line, include Earl's name, your own, and your address) or online www.community biblestudy.org/donate. Compass Evangelical Free Church, 600 Silvey St., Columbia, MO 65203. Missouri Valley College, attn. Eric Sappington, Wilma Reeves Scholarship, 500 E. College St., Marshall, MO 65340

The family of Earl James Reeves, Jr. created this Life Tributes page to make it easy to share your memories.

Send flowers to the Reeves family.