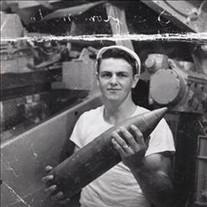 Dwight David Humphrey, 75, a lifelong resident of Muskogee, OK, went to be with his Lord July 31st, 2021. Dwight was born October 31st, 1945 in Muskogee to Jack and Elaine Reece Humphrey. He joined and served in both the Army and Navy. It was during this time he served with distinction and was recognized with the Vietnam Service Medal. One regret he always had was that he wished to have served in the military longer. Dwight loved his northeast Oklahoma roots and lived in Braggs, Fort Gibson and Muskogee so he could enjoy hunting, fishing and training dogs. One of Dwight's greatest joys was sports, especially baseball. For many years he coached little league baseball for his kids and nephews. No matter where he was or where he went, he was always able to make a new friend. Dwight never met a stranger! Dwight frequently attended Timothy Baptist Church, where he came to know the Lord. He enjoyed listening to hymns and reading his Bible. Dwight Humphrey is survived by his daughter & two stepchildren, Whitney and Brad Brown of Broken Arrow, OK; Brandy and Terry Wheeler of Muskogee, OK; and Joseph and Erica Neves of Muskogee, OK. His granddaughter, Hadley Brown of Broken Arrow, Ok. His two grandsons, Joseph Neves II of Muskogee, OK; and Easton Neves of Muskogee, Ok. His two brothers, Greg Humphrey, of Muskogee, OK; Doug Humphrey of Muskogee, Ok. His niece and nephews, Lisa & Mark McManus of Muskogee, OK; Nicholas Humphrey of Gore, OK; & Dylan Humphrey of Gore, OK. His great nieces and nephew Kristin & Billy Blakeslee of Ft Leonard Wood, MO; Scott & Allison Mitchell of Muskogee, OK; Brittney & Brett Jackson of Muskogee, OK. He is also survived by his lifelong friends the Kizzia Family of Braggs. Along with his chubby cat Sophie. Dwight is preceded in death by his parents Elaine Humphrey, 1994 & Harold "Jack" Humphrey, 1955; his son Shawn Humphrey, 1984; his grandson Bradley Dillion, 2020; his sister Judy Bever, 2009; his nephew Steve Hellinghausen, 2008; his nephew Gregory Humphrey, 2020; His former wife Angela Callison, 2019; & his beloved dog Ralphie 2017. Services will be August 6th at 2:00pm, First Free Will Baptist Church. 1487 E Poplar Fort Gibson, OK 74434. Service will be officiated by Pastor Kelly Payne of Timothy Baptist. Honorary pallbearers: Greg Humphrey, Doug Humphrey, Joseph Neves, Scott Mitchell, Nicholas Humphrey and Dylan Humphrey. Funeral services provided by Serenity Tulsa

Dwight David Humphrey, 75, a lifelong resident of Muskogee, OK, went to be with his Lord July 31st, 2021. Dwight was born October 31st, 1945 in Muskogee to Jack and Elaine Reece Humphrey. He joined and served in both the Army and Navy. It... View Obituary & Service Information

The family of Dwight David Humphrey created this Life Tributes page to make it easy to share your memories.

Send flowers to the Humphrey family.