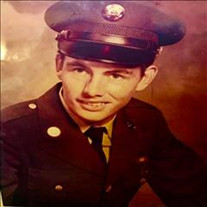 Donald Ray Ashlock of Mannford, OK, passed away October 8, 2021, at the age of 67 years old after suffering 28 days in the hospital from a biological warfare also known as COVID. Don was born to Donald Chester Ashlock and Vida Mae Kendrick on April 22, 1954, in Turley, OK. In 1971, he married Paula Jean Osborn and much to his mother's dismay, he joined the US Army where he served 2 years in Service Battery, 6th Artillery, 1st Calvary Division, in Korea. Taught guitar by his grandmother, Mamie, Don was a gifted guitarist and song writer. He honed his skills with childhood friends, the Watts family. His guitar accompanied him on most social occasions and he was often requested to play by friends and family. There are a few YouTube videos where you can watch him sing and play. He worked as pipe fitter/welder, operated a dump truck and worked in vessel shops. Don struggled with addiction in his younger years, but always maintained a deep love for the Lord. He shamelessly shared his testimony of overcoming addiction to countless people, continuously gave God praise and thankfulness of His mercy for saving him. He often played a cover song with these words, "Thanks to Calvary, I am not the man I used to be. Thanks to Calvary, things are different than before�.Thanks to Calvary I am not that old man anymore." He is survived by his daughter, Michelle Ashlock, Tulsa; father and stepmother Donald Chester and Bonnie Ashlock, Branson; siblings, Larry Ashlock, Mannford; Terry and Dayna Ashlock, Skiatook; Sharla and Ron Hildner, Fletcher; and Kimberly and Steve Smith, Catoosa. Grandchildren, Anthony Willhite and Ashley Nixon and three great grandchildren. Two close and loyal friends, Duane Burgess and Margaret Ann Hendrickson- Burgess and his dog, Little Man. He is preceded in death by his son, Jason Mitchell Ashlock; mother, Vida Mae Kendrick Ashlock Turley, stepfather, Ralph Dewitt Turley, grandparents George and Mamie (Coker) Kendrick, Virgil Leslie and Rose Opal (Siedlik) Ashlock and sister-in-law, Donna Robinson Hall Ashlock. A celebration of life service will be held with military honors on Sunday, October 17, 2021, at Mannford Assembly of God at 3:00 p.m., with Pastors Matthew Stidham and Jim Crain officiating. Don penned these words to a song, years ago when his grandmother Mamie was still living "If you could see me now and the life that he's gave me. He's taken away the pain and all the misery and reborn me clean". Rest in peace.

Donald Ray Ashlock of Mannford, OK, passed away October 8, 2021, at the age of 67 years old after suffering 28 days in the hospital from a biological warfare also known as COVID. Don was born to Donald Chester Ashlock and Vida Mae Kendrick... View Obituary & Service Information

The family of Donald Ray Ashlock created this Life Tributes page to make it easy to share your memories.

Send flowers to the Ashlock family.