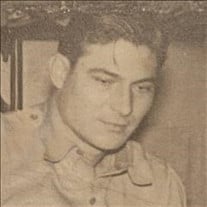 Lewis Martin was born in Haworth, Oklahoma on November 7, 1928 to Joseph & Eather Martin. He was the oldest of five children and had one sister and three brothers. As a child, Lewis lived in Haworth & Talihina, Oklahoma and moved to Tulsa, Oklahoma in 1955. During the Korean War, Lewis served active duty in the United States Army from January 30, 1951 to January 6, 1953. Lewis' father Joseph Martin and brother Joseph Martin, Jr also served in the United States Army. Additionally, Lewis' son Randy Martin served in the United States Army from March 1, 1988 to August 1, 2008, serving in both Gulf wars and retiring after twenty years. As a teenager, Lewis learned to play the guitar and loved both playing and listening to others play. The artists that he listened to most were Chet Atkins, Merle Travis, Doc Watson, & Jerry Reed, and he adapted his style of guitar picking to Chet Atkins' style. Lewis' brother Travis Martin shares his love of guitar as well as Chet Atkins' style of guitar picking. Travis' daughter and Lewis' talented niece Teresa Webster also shares their love of guitar, and Lewis so enjoyed listening to Teresa pick guitar. Lewis also enjoyed listening to the musically gifted Martin family sing and play. Lewis wed Harriet Rhodes on May 30, 1964 and was married for fifty-seven years. Lewis had a son, Randy and a daughter, Susan. Lewis enjoyed deer hunting with his brother Travis and occasionally Lewis' son Randy was also able to join them. Lewis spent the majority of his career at Unit Rig Corporation where he worked for thirty-three years before retiring at the age of seventy. Lewis has since enjoyed twenty-three years of retirement following his career. Lewis passed away in his home in Tulsa, Oklahoma on December 27, 2021 with his wife Harriet by his side. Lewis was preceded in death by his parents, one sister, and two brothers. He is survived by his wife, one son, one daughter, one brother, two sisters-in-law, five grandchildren, one great-grandchild, four nieces, and two nephews. Lewis lived a good life of ninety-three years. He was a good man, Husband, Daddy, Grandpa, Great-Grandpa, Son, Brother and Uncle. Although we miss him dearly, he would want us to celebrate his life and remember all the good memories that we shared with him over the years.

Lewis Martin was born in Haworth, Oklahoma on November 7, 1928 to Joseph & Eather Martin. He was the oldest of five children and had one sister and three brothers. As a child, Lewis lived in Haworth & Talihina, Oklahoma and moved to Tulsa,... View Obituary & Service Information

The family of Dolphia Lewis Martin created this Life Tributes page to make it easy to share your memories.

Send flowers to the Martin family.