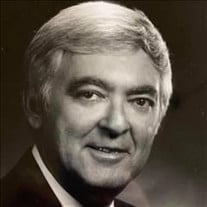 Nov 26, 1938 - June 9, 2021 Tulsa, Dennis McKinley Rosson was born to Vivian McKinley Rosson and Ethel Jaunita Harris in Cushing, Oklahoma on November 26, 1938. With his family by his side, he left this world to be with his Lord and Savior, Jesus Christ, on June 9, 2021. Dennis graduated from Cushing High School in 1957. He joined the Army National Guard right after high school where he received rank of Private E-2 and was a Qualified Sharpshooter. He received an Honorable Discharge on December 15, 1957 due to a family emergency. He later attended Oklahoma State University and graduated with a Bachelor's Degree in Diesel Engineering. His work within Diesel Engineering gave him the opportunity to work with a number of corporations and the automobile industry. This enabled him to enjoy his love of auto racing and interacting with drivers, builders, and owners. His love of fishing led him to a career as a fishing guide on Table Rock Lake and Lake Taneycomo while living in Forsyth, Missouri. When Dennis worked at Central Vo-Tech in Drumright, Oklahoma he met his future wife, Linda Gant Cullers. They were married in 1972. No matter where Dennis lived, he was devoted to his church and loved to serve others. On Friday nights you could always find him playing cards with his wife and their friends. In his later years, he became an avid cook and his family and church family always looked forward to his latest creation. He was preceded in death by his parents; and one sister, Nita Lou Rosson. He is survived by his wife, Linda Rosson; one sister, Sandra Nichols of Shawnee, OK; daughter, Velisa Robbins and her husband John, of Yukon, OK; daughter, Billie "BJ" Fryar of Fargo, ND; son, Dr. Lance Rosson and his wife Lori, of Oklahoma City; daughter, Kim Krump and her husband Jack, of Olathe, KS; daughter, Kari Prekel and her husband Mike, of Fargo, ND; grandchildren, Jake Robbins, Mariah Small and her husband Evan, Sarah Robbins, Chris Onan and his wife Maxine, Cheree Farrow and her husband Levi, Margaret "Meg" Rosson, Rachel Payne and her husband Austin, Grace Rosson, Zac Krump, Jesse Krump, Gabrielle Krump, Samantha Miller and her husband Tyler, Zac Prekel, and Kelsey Prekel; great-grandchildren Jax Robbins, Willow Small, Kai Farrow, and Raymond Farrow; as well as numerous nieces and nephews and a host of family and friends. Dennis will be remembered as a loving husband, father, papa, and friend and will be deeply missed. His family is honoring Dennis' wishes to be cremated. A praise and worship service will be held on Wednesday June 30, 2021 at 11AM at the First Christian Church in Vinita, Oklahoma. In lieu of flowers, a donation in his name can be made to St. Judes Childrens Hopsital or First Christian Church in Vinita, Oklahoma.

Nov 26, 1938 - June 9, 2021 Tulsa, Dennis McKinley Rosson was born to Vivian McKinley Rosson and Ethel Jaunita Harris in Cushing, Oklahoma on November 26, 1938. With his family by his side, he left this world to be with his Lord and Savior,... View Obituary & Service Information

The family of Dennis McKinley Rosson created this Life Tributes page to make it easy to share your memories.

Send flowers to the Rosson family.