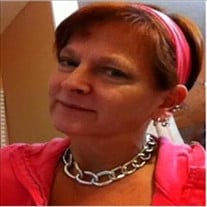 Deborah Masnica Chandler, 56, passed from this life December 22, 2020, at her home in Wagoner, Oklahoma. Born in Tulsa, OK, to Alice (Skeehan) and Joseph J. Masnica, Jr., Deborah graduated from Will Rogers High School in 1982. After living... View Obituary & Service Information

The family of Deborah Chandler created this Life Tributes page to make it easy to share your memories.

Send flowers to the Chandler family.