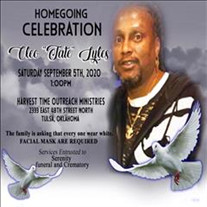 Cleo Alandus Lyles "Tate" On October 6, 1968, a handsome baby boy was born to Carlis Marie Lyles and John Tate, they named him Cleo. Cleo was the youngest boy of 7 children to Marie. He grew up in the Tulsa Public School system where he attended East Central High School. Cleo had a passion for breakdancing, basketball, and was known for his tidiness and love for shoes. He was a man of many talents. From car repair to carpentry, he was rightly an entrepreneur. Cleo was big on manners. You could not walk in his home and not speak. Truly an "old soul". Often you could find him with MJ and a cigar, reminiscing about old times growing up in Morning Star, singing R&B, or showing off to the kids his Break dance moves. In 2001, Cleo married the love of his life Melissa Alexander, and together with their children, they became a blended family. Cleo loved his family and had a passion for helping others. Rather it was teaching the kids how to properly clean their shoes, giving candy out to the neighbors, or putting Armor All on his children's cars. Later in life, Cleo gave his life to Christ. On Saturday, August 22, Cleo was called home. He is preceded in death by his mother and father Carlis Marie Lyles, and John Tate, His sister Rose Lyles, daughter Melissa Bledsoe, and nephew Brad Lyles He leaves to cherish his wife Melissa Lyles, his children Brandon Powell, Cleo (Ebony Davis), Renesha Davis, Unique Tuner(Chennyri Whitaker), Dontoya Bledsoe, Rashona Bledsoe, and Shardell Davis (Damien Davis), His brother Marcus Tate (Lavonda Boyd), and sisters Sherry Lyles, Sharon Gray, Tara Lyles (Tim Gaffney), Denise (Julius Knappier), 13 grandchildren, 2 great grandchildren, and a host of Aunts, Uncles, Cousins, Nieces, and Nephews. There will be a visitation on Friday, September 4, 2020 from 1:00pm - 6:00pm at Serenity Funeral Home and Crematory Chapel. There will be a funeral service to celebrate Cleo's life on Saturday, August 5, 2020 at 1:00pm at Harvest Time Outreach Ministry in Tulsa, Oklahoma. Burial will follow the service at Crown Hill Cemetery. There will be a reception held following the burial at Serenity Funeral Home Reception Hall. Services are under the direction of Serenity Funerals and Crematory in Tulsa, Oklahoma The family is requesting only white floral arrangements.

Cleo Alandus Lyles "Tate" On October 6, 1968, a handsome baby boy was born to Carlis Marie Lyles and John Tate, they named him Cleo. Cleo was the youngest boy of 7 children to Marie. He grew up in the Tulsa Public School system where he attended... View Obituary & Service Information

The family of Cleo Alandus Lyles created this Life Tributes page to make it easy to share your memories.

Send flowers to the Lyles family.