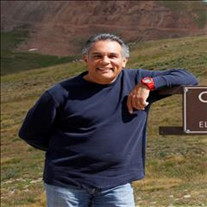 Dr. Christopher James Gomez Christopher James Gomez was born on November 1, 1954, in Tulsa, Oklahoma, to Josephine Marie Gomez and Cecil Gomez. He graduated from Charles Page High School in 1972. On December 30, 1978, he married his sweetheart, Rose Ann Brocato. Chris graduated from Logan College of Chiropractic in St. Louis, Missouri, with a Master of Science in 1981. He practiced as a Chiropractic Physician for 8 years in Pueblo, Colorado, followed by 31 years in Tulsa, Oklahoma. Together, Chris and Rose had six children. Chris had many passions during his lifetime. He loved taking summer vacations in Colorado and 4-wheeling through the mountains. He was very passionate about his practice and found great satisfaction in helping his patients and friends; he was a gifted healer. Chris was a family man and enjoyed spending time with his children and grandchildren, usually accompanied by a wonderful meal that he had prepared. Above all, he had a beautiful relationship with the Lord and knew the love of our Heavenly Father. He went to be with the Lord on November 29, 2020. Chris is preceded in death by his father, Cecil; his sister, Cecilia Bias; and his wife, Rose. He is survived by his mother, Josephine; older sister, Cynthia Rogers and her husband, Bob; younger brother, Joseph Gomez; his children, Christopher Ryan Gomez, his wife, Joy, and their daughters, Lia and Lydia; Paul Gomez, his wife, Anna, and their son, Andrew; Jessica Jennings, her husband, Jeremy; Elise Koelsch, her husband, Jay, and their daughter, Gabriella; Sarah Gomez-Webster, her husband, Kenneth; and Candace Gomez. Chris is a treasured son, father, grandfather, friend, and healer. He will be missed deeply by many. Funeral Service will be 10am Saturday March 20, 2021 at Victory Church, 7700 S. Lewis, Tulsa, Oklahoma 74136. For God so loved the world that he gave his one and only Son, that whoever believes in him shall not perish but have everlasting life. John 3:16

The family of Christopher James Gomez created this Life Tributes page to make it easy to share your memories.

Send flowers to the Gomez family.