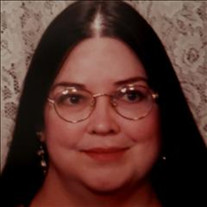 Catherine Ann Philo Lackey left our lives on January 21st, 2021. She was born on September 19, 1955 at Barksdale Air Force Base, Bossier? Parish, Louisiana. Catherine's father was in the Air Force, and she and her family traveled extensively throughout her childhood. She attended French Immersion School when they lived in France, and she spoke fluent French. In 1969 the family moved to Tulsa, Oklahoma. Catherine graduated from Nathan Hale high school in 1973. She studied drama and music at the University of Oklahoma in Norman, Oklahoma from 1973-1976. She worked as an accounts manager at Metro-Port Warehouse Co. of Oklahoma, Inc from 1990 to 2007. In 1979 she became involved in the Society for Creative Anachronism (SCA), a medieval and renaissance re-enactment group and she and her husband were early formative members of the local chapter in Tulsa, Oklahoma called Northkeep. From the very beginning her talent as a seamstress and designer of historical garments was evident and she became renowned in the SCA for her beautiful handwork and design. She also designed and made costumes for the Tulsa Performing Arts Center. Catherine had a life-long love affair with the SCA. She was known as Catrin ferch Gwilym O'Gonway, and her considerable talents as an artist, costume designer, embroiderer, musician, and jewelry designer were very appreciated. She won numerous accolades and honors, elevating herself almost as high as anyone could hope to go. But she also elevated all who associated with her. She was a willing teacher and source of knowledge and encouragement to anyone who sought her out. She made us better and determined to work harder. She received seven awards and three titles and was highly honored in the SCA. She also held numerous officer positions in the local and regional SCA chapters. It was through the SCA that Catherine met and married the love of her life, Anthony Lackey in 1992. They shared a love of medieval history, art, and literature. Catherine and Anthony had a storybook romance and were happily married for 28 years, until his death in 2020. Catherine was kind and generous with her time, talents, and resources. She was also beautiful, both inside and out. She often told young women to be beautiful, but fierce. She was strong, independent, and quick to defend the weak and help those in need. Catherine also had a strong love for animals and adopted many homeless cats and dogs throughout her life. She generously contributed to animal rescue organizations. Catherine was preceded in death by her parents Charles and Birdie "Millie" Beebe Philo, Aunt and godmother "Nita" Freeland, and her beloved husband, Anthony Lackey. She is survived by her sister and brother-in-law, Sandra and Brett Elbon, nieces Grace and Greer Elbon, goddaughter Melanie Woodworth McNew and godson Will Woodworth.

Catherine Ann Philo Lackey left our lives on January 21st, 2021. She was born on September 19, 1955 at Barksdale Air Force Base, Bossier? Parish, Louisiana. Catherine's father was in the Air Force, and she and her family traveled extensively... View Obituary & Service Information

The family of Catherine Ann Lackey created this Life Tributes page to make it easy to share your memories.

Send flowers to the Lackey family.