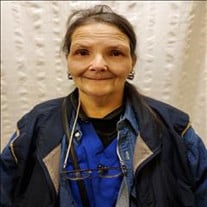 Catherine "Cathy" Mae (Peterson) Hartsfield passed on from this Earth in the early morning hours of May 18, 2021, after a short fight with cancer. She went peacefully and painlessly, with her daughter Sara by her side. Born October 22, 1958 in Helena, Montana, Cathy was a creative and independent spirit who touched the lives of all she encountered. She had several jobs as a young woman, including a time as a cab and bus dispatcher for the City of Helena. It was here that she would meet her future husband, Tom Hartsfield. They were wed December 7, 1979 after a short courtship. It wasn't long after that their first child arrived, and they moved to Florida to be closer to better medical care for their son. Cathy and Tom would go on to have 3 more children in Florida, and family life ensued. Cathy went back to school for a short time before accepting a position doing data entry for Consultec. After a number of years she moved on to Unisys, doing the same thing. She would participate in "Bring Your Daughter to Work Day" throughout this time, which her daughter fondly remembers. A child at heart, Cathy collected toys much of her adult life. Her interests ranged from Cabbage Patch Dolls to tech items, including robots, to Happy Meal toys, and lots of items in between. She was particularly fond of The Nightmare Before Christmas, and she loved her robots dearly. She had a kind soul, empathizing will all manner of creatures and critters. Anytime she could help an animal, real or stuffed, she would. She also had a very active imagination and would empathize strongly with her toys. After her divorce in 2000, she relocated to Tulsa, Oklahoma. It was here that she would become a customer service representative for DirectTV, which later became AT&T. She would work there for the rest of her life, and would make several good friends there. Cathy is survived by her her children and their spouses, Eric and Jene'e Hartsfield, Chris and Crissy Hartsfield, Sara and Andrew Baker, and Ben and Jessica Hartsfield, nine and a half grandchildren, her brother, Richard Peterson, a niece and her husband, Erin and Nathan Peeling, two step-sisters and their spouses, Vivien and Chuck Allen, and Penelope and Pete Queen, and great friends Amy Scott, Neda Grayson, and Ann McGregor, among others. She is preceded in death by her mother, Nettie Peterson, her father and step-mother, Larry and Lola Peterson, her sisters Gloria Kinney, Debi Peterson, and Sharon Peterson, aunts Gladys (Don) Marion, Leona LaCourse, Donna Brown, Uncle Howard Poe, and all of her great aunts and uncles. Services will be announced at a later date. In lieu of flowers, please make a donation to a charity of your choosing.

Catherine "Cathy" Mae (Peterson) Hartsfield passed on from this Earth in the early morning hours of May 18, 2021, after a short fight with cancer. She went peacefully and painlessly, with her daughter Sara by her side. Born October 22, 1958... View Obituary & Service Information

The family of Catherine Mae Hartsfield created this Life Tributes page to make it easy to share your memories.

Catherine &quot;Cathy&quot; Mae (Peterson) Hartsfield passed on from this...

Send flowers to the Hartsfield family.