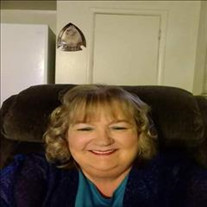 Marie age 64, gained her heavenly wings Monday, March 29, 2021. She was in Hillcrest hospital. She was born to Chester Cartmel and Helen Keller in 1957. After her father passed away, Helen her mom married and she was raised by her dad, Otha "Sonny" Horton and her mom Helen Keller Horton. She was born and raised in McAlester, lived many years in Denison, Texas, with her husband David Boatner, but after he passed away, she moved back to Oklahoma, she finally settled in Jenks, Oklahoma, where she resided the last several years. She is survived by: Ronnie Hiser, son and spouse Jennifer of Checotah, Oklahoma; Tommy Hiser, son and spouse Kimberly; Brett Teafatiller, honorary son and spouse Tammi of Haileyville, Oklahoma; Mary Dowdy, step daughter of Denison , Texas; William Boatner, step son and spouse Amanda of Vale, North Carolina; Allen Boatner, step son, of Oklahoma City. Fiance, Thomas Martinez, of the home. Grandchildren: Karson Hiser of Checotah, Oklahoma; Kamryn Box and partner Allen Gorby of Stidham, Oklahoma; Kaelyn Box Nelson and spouse Christian of Van Buren, Arkansas; Tara Hiser, Van Buren, AR, Megan Hiser of McAlester, Eric Moser and partner Jessica of Barling, Arkansas; Jason Moser and spouse Jenni of Van Buren, Arkansas; Kaden and Makenzie Teafatiller of Haileyville, Oklahoma; Starla Boatner of Denison, Texas, Allyson Boatner of Denison, Texas; Darla Boatner of Admore,Oklahoma; Delaney of Denison, Texas; Nathan Dowdy of Tecumseh, Oklahoma; Caleb; Brianna Dowdy; Summer Rogers and spouse Casey, of Vale, North Carolina; Meghan Hiser of Mcalester and Tara Hiser of Van Buren, Arkansas. Numerous Great grandchildren. One Aunt, Onie Keller of Bakersfield, California. Several cousins including: Mildred Melson of the home; Jeanetta Dougherty of Tulsa; Wayne Keller, Patty Keller and Wayne Keller all of Bakersfield, California and Lois Kannady of McAlester, Oklahoma. She has numerous nieces and nephews. Marie had numerous very close and very special friends and family members including : Billie Kennon of Denison, Texas; Gloria Valdez; Debbie Boatner of McAlester, Oklahoma; Dean & Betty Boatner of McAlester, Oklahoma; Candace Graham and Rena Holland both of Jenks, Oklahoma. and several others. She was proceeded in death by her biological father Chester Cartmel; Her dad and mom, Otha "Sonny" Horton and Helen Keller Horton; Her husband David Boatner; Her twin (Dowdy) grandbabies; Her Uncle Herbert Keller; Her Aunt Nora Keller Stuck. Several brother in laws and sister in laws. Marie spent the majority of her life cooking to earn a living. She worked at Dairy Queen in Denison, Texas for many, many years. She loved her children very much, but, her grandchildren and great grandchildren were the icing on the cake. Blood or step it made absolutely no difference to her. She loved them all the same. Same as her kids and step kids. She was looking forward to a new great grandson any day. She had several hobbies: crafting especially with crosses, old jewelry flowers, stones/rock, she loved going to family reunions, spending time with family. She cooked for the family reunion, for many many years until she couldn't anymore, due to health reasons. She enjoyed playing Bingo. She loved finding bargains and having garage sales.. She loved spending time and having new adventures and going new places with Thomas, her fiance. Graveside service will be held April 10th, 2021 Saturday at NOON, at Indianola, Cemetery Hwy 113 Indianola, Oklahoma. She wished to be cremated. Brother Jim Branscum will be officiating the service. Flowers can be sent to Serenity Funeral home and Crematory 4107 E Admiral Place Tulsa, Oklahoma by April 8th, OR bring flowers with you, to put on gravesite OR in lieu of flowers her family asks you donate to St. Jude's Children's Hospital in memory of her name.

Marie age 64, gained her heavenly wings Monday, March 29, 2021. She was in Hillcrest hospital. She was born to Chester Cartmel and Helen Keller in 1957. After her father passed away, Helen her mom married and she was raised by her dad, Otha... View Obituary & Service Information

The family of Beatrice Marie Boatner created this Life Tributes page to make it easy to share your memories.

Send flowers to the Boatner family.