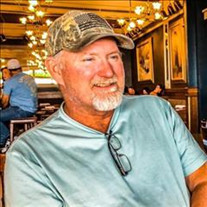 Alan Boyd Worthington 1962 - 2021 Alan Boyd Worthington, 58, passed away unexpectedly on Sunday, September 5, 2021. Alan was born in Tulsa, Oklahoma on November 14, 1962, to Bo and Patsy Worthington. He attended Union High School and graduated in the class of '81. Alan was a loving and devoted father to his three children, Courtnie, Jesse, and Cassie, and his stepson, Ervin Thompson, who were the loves of his life. He coached his daughter Courtnie's softball team and never missed any of his children's sporting events. Alan was always available to help a neighbor, friend, or family. Although he could be tough, he had a big heart to serve and was the hardest worker his family and friends knew. He was always there to crack a (sometimes inappropriate) joke that was sure to make everyone smile. His weekends spent hunting on The Ranch with some of his best buddies brought him great joy and was his outlet. The freedom of being in the woods brought him peace and pure happiness. Alan was also always up for an adventure, and would never turn down the opportunity to cause a little trouble. The stories he shares with his siblings as they were growing up are ones that will last a lifetime. Alan was preceded in death by his grandmother, Erma Smither in 2017 and his nephew, Harrison Black in 2003. He is survived by his mother, Patsy Worthington; his father, Bo Worthington; his daughter, Courtnie; son, Jesse; and daughter, Cassie; his stepson, Ervin Thompson; his brother, Bret and his wife, Kim Worthington; his sister, Debra Worthington; his nephew, Colten Worthington; his niece, Britney Worthington; his girlfriend, Brandy Fischer; and her sons, Aidyn and Joseph Fischer, as well as many beloved relatives, friends, and his beautiful flock of pet birds. We will remember Alan and his love for his family and friends and are comforted in knowing he is in his forever home. We are so thankful for the outpouring of love and support, and the community surrounding us. We'll be sure to drink a beer in his honor. A memorial service will be held on Monday, September 13th at 10 o'clock in the morning in the Memorial Park Chapel at Memorial Park Cemetery, 5111 S Memorial Dr, Tulsa, OK 74145. Flowers may be sent to Moore Funeral Home, 9350 E 51st Street, Tulsa Oklahoma 74145. A celebration of life will follow at a later date to be determined. Alan would always say that he was a "free bird," and now he truly is.

The family of Alan Boyd Worthington created this Life Tributes page to make it easy to share your memories.

Send flowers to the Worthington family.